The ISO norm line 9241 states some criteria for ergonomics of human system interaction. In markets with a huge variety of offers and little possibility of differentiation, providers can gain a decisive competitive advantage by user oriented interfaces. A precondition for this is that relevant information can be obtained for entrepreneurial decisions in this regard. To test how users of universal search result pages use those pages and pay attention to different elements, an eye tracking experiment with a mixed design has been developed. Twenty subjects were confronted with search engine result pages (SERPs) and were instructed to make a decision while conditions “national vs. international city” and “with vs. without miniaturized Google map” were used. Different parameters like fixation count, duration and time to first fixation were computed from the eye tracking raw data and supplemented by click rate data as well as data from questionnaires. Results of this pilot study revealed some remarkable facts like a vampire effect on miniaturized Google maps. Furthermore, Google maps did not shorten the process of decision making, Google ads were not fixated, visual attention on SERPs was influenced by position of the elements on the SERP and by the users’ familiarity with the search target. These results support the theory of Amount of Invested Mental Effort (AIME) and give providers empirical evidence to take users’ expectations into account. Furthermore, the results indicated that the task oriented goal mode of participants was a moderator for the attention spent on ads. Most important, SERPs with images attracted the viewers’ attention much longer than those without images. This unique selling proposition may lead to a distortion of competition on markets. 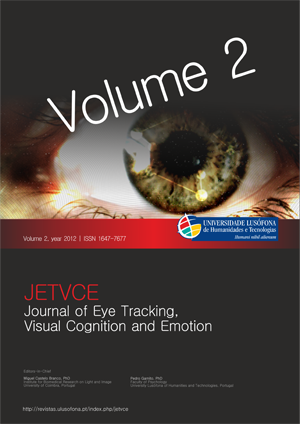