Raped Africa, Mother Africa, Emasculated Africa: The evolution of the gendered national body in the fiction of Abdulai Sila

The exploitation and trauma of the colonised nation has often been written upon the female body, and in turn the land has been accorded feminine characteristics. European colonisers talked of their divine, patriotic mission to penetrate virgin lands in order to inseminate them with the seed of civilisation. This allegory evolved in postcolonial discourse into the figurative rape of the colonised land and the societies that inhabited them. With the figuring of the nation as family (McClintock, 1993) the innate femininity of the native land was perpetuated in African nationalists’ and ªan-Africanists’ romanticisation of their origins as Mother Africa. This paper will examine the gendering of the bodies upon which the narrative of the nation is written in the three novels of the Bissau-Guinean author Abdulai Sila. A Última Tragédia (1995), his second published work but whose narrative sits chronologically first of his three novels, centres on the trope of the female Africa in inscribing the colonial nation upon the body of his protagonist Ndani as she symbolically undergoes the physical, psychological and cultural violations which likewise oppressed the nation. Eterna Paixão (1994) features the romanticisation of Africa as the loving, vital, fecund Mother, a symbolism which spills onto female bodies as the African-American protagonist’s tempestuous connection with the post-colonial continent is reflected in his relationships with the homely African Mother figure and the sexually charged, morally deviant African Woman. Finally, this paper will explore and interrogate Sila’s innovative evolution of the post-independence national body into the emasculated man in Mistida (1997). Here the male body becomes the site upon which the corruption and political violence brewing in the years preceding the 1998 civil war and their grave consequences upon Guinea Bissau’s social fabric are figured in the physical disabilities, psychological scarring and social incapacities of poignantly male characters. Keywords. Guinea-Bissau, Gender, National body, Nationalism, Post-colonialism 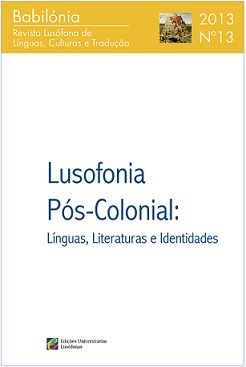